performances by the classic Bunraku Puppet Theater of Japan, and the traditional Wayang Golek of Indonesia.  These were life changing events that sent him on a course of artistic discovery that continues to today.

After more than thirty years, hundreds of puppets and dozens of productions, he and his troupe have been privileged to make thousands of appearances in performing arts centers, universities, museums and schools across the country.  Internationally, he has appeared in the Neopolis Children's Theater Festival in Nabeul, Tunisia; the Global Puppet Theater Festival in Kaohsiung, Taiwan; the World Puppet Festival in Prague, the Czech Republic; the Puppets Up! Festival in Almonte, Canada; the Children's Palace in Beijing, the People's Republic of China; and FANA, the Foundation for the Assistance of Abandoned Children in Bogota, Colombia.

Besides being an accomplished theater producer, director, playwright and designer, Robert has devoted much time to teaching young people the art of puppetry as a means of self expression, and has been an advocate of integrating the performing arts into the public school curriculum.  In 1999 he established The American Puppetry Project, a nonprofit organization dedicated to helping students explore topics of study in the classroom by means of puppet-making and dramatic arts workshops and residencies.

Robert received his B.F.A. from the Tisch School of the Arts at New York University.  He is also an accomplished cellist, and a member of Sertoma International, a civic and philanthropic organization.

He was also the subject of an episode of the PBS television series, Expressions, produced by WSKG-TV. 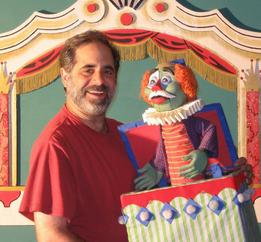 Robert became fascinated and captivated by the art of puppetry at a very early age.  Growing up in and around New York City with parents who were avid theatergoers, he was taken to experience the wonderful Bil Baird Marionette Theater in Greenwich Village; to see the prestigious Sergei Obraztsov troupe on tour from Russia; as well as,

More about the puppets, backstage information, and other fun stuff.