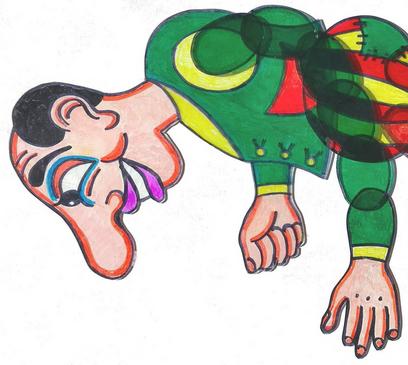 ​Robert Rogers has applied his knowledge and years of expertise to create and perform this new show, to honor the heritage of Karaghiozis and make him available to audiences of all ages .

Shown above from left to right: Peponias the Chief of Police who smells trouble in the bake shop's oven, Haridimos the Mayor who's ordered a birthday cake, Karaghiozis, Yia Yia who's got some "sticky" fingers, Mouhtar Bey who has also ordered a special cake, and Hatziavatis, the bake shop owner.

At right, Robert brings Karaghiozis to life against the special "shadow screen."  Note the sticks used to bring him to "life" and the many jointed parts of his peculiarly, funny body.

​   This special project features a little fellow who has entertained generations of delighted audiences for hundreds of years, and has secured for himself international fame.  It's true!  He has meant so much to people, and is so many things at once: a scoundrel, a clown, a family man, a lazy good-for-nothing, a hero (well, that much is up for debate), that his popularity has no bounds.  But one thing is for sure, he is a part of the cultural fabric of Greece, and always will be.

He and his friends are called "shadow puppets," quite a unique form of theater.  They are merely two-dimensional and appear on a large white screen, lit from behind.  Their "see-through" colors are vibrant, and the effect is magical.

The plays in which Karaghiozis appears are as numerous as the puppeteers who have brought him to life throughout history.  In Karaghiozis the Baker, a job in his friend, Hatziavatis', bake shop leads to one comical disaster after another as customer demands, a fiery oven and even a stray cat cause problems.​ 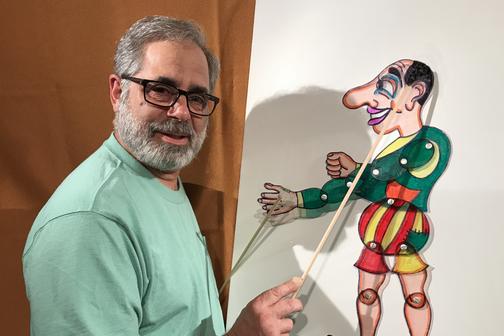