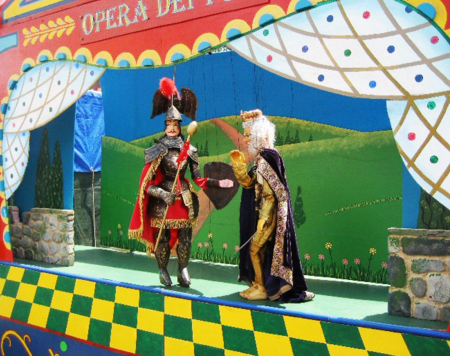 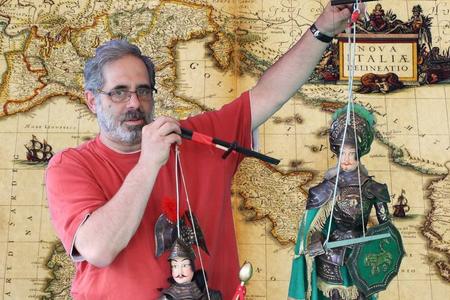 Today, along with other puppets that portray his battle-worn comrades, enemies and loves, he is largely relegated to being on display in museum collections, and represents a traditional - if old fashioned - form of entertainment.  But the clang of his sword and his honor-bound mission still ring true.

As a life-long student of puppetry, as well as a practitioner, Robert Rogers has embarked on a quest to explore the theatrical heritage of this famous medieval knight, and to do his part to keep Orlando Furioso in front of the theater-going public.  In addition, Robert's efforts have been sparked by a collection of marionettes that he inherited some years ago, that were made by the brother and sister team of Lewis and Sara Goldsmith, back in the 1930's.

These incredibly detailed and costumed figures lend themselves perfectly well to the genre and storyline, and possess the kind of antique respectability that makes the drama all the more compelling.  Plus, they are a joy to work with.

However, time affects everything, and marionettes from the 1930's, however fascinating they may be, are too delicate for repeated use on the stage.

So the project has expanded to include the building of a new cast of characters.  Authenticity is the goal, just as it was when Robert wrote the first words of the play, designed an ornate, colorful stage and scenery, and developed the musical background accompaniment.​

The heart of Orlando Furioso will beat ever stronger, and this version of his further adventures, no matter how perilous, will go on! 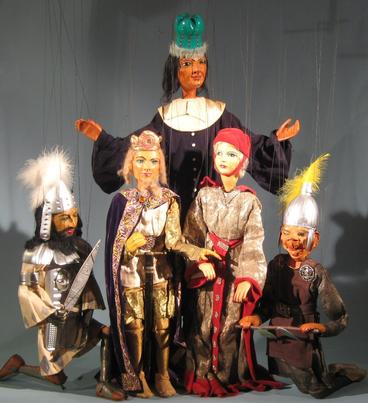 In history, legend, literature and even puppet theater, Orlando Furioso - the virtuous knight in service to King Charlemagne - has been featured loud and strong.  Clad in shining armor and bearing a heavy sword, the 8th Century hero's exploits have been celebrated in story and song for hundreds of years. He's fought his way through epic battles, conquered mammoth giants, slain ferocious dragons and felt the deep agony of a broken heart.

As a marionette incarnation, his peek of popularity occurred in 19th Century Sicily, where he was a leading character of the Opera die Pupi.  Night after night, audiences would flock to a multitude of family run puppet theaters to see the next installment of his many adventures.